Not Organizing for the Fun of It: Suffrage, War, and Dallas Women in 1918

Who were the local activists that helped expand the right for women to vote? Throughout the late 19th century and early 20th century, women’s clubs became a center of social life and activism. In March 1918, forces collided as Dallas women experienced two distinct, but connected triumphs: they opened a large canteen, serving all the soldiers passing through the city on their way to World War I battlefields. They also won the right to vote in Texas primaries, the first step towards full voting rights. Through this work, they also managed to radically change one politician’s views on suffrage. These victories wouldn’t have been possible without the lessons learned through women’s clubs. Join local scholar Melissa Prycer to learn more about these local legends—and who we should thank each time we cast a ballot! 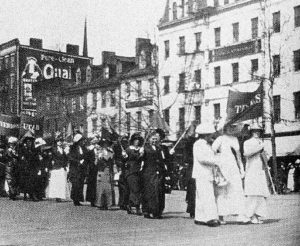 Individual sessions are $10 each for current members of Preservation Dallas and $20 each session for non-members. Save money by purchasing all six sessions as a bundle! (available until July 14th)*

*Attendees who purchase the non-member series bundle will receive a complimentary one year Individual membership to Preservation Dallas.

Click here to register for this session or to purchase the series bundle.

Wilson Carriage House at 2924 Swiss Avenue (located in the building behind the Wilson House).

Parking for the Wilson Carriage House is in the rear parking lot behind the Wilson House. Enter through the open gate on Liberty Street.