“I always said I wanted to live until a hundred or ninety-five but now I realize that it doesn’t matter how long you live, it only matters what you did in the time you were alive. It seems like Ginx lived a really, really long time because she did so much.” Be a part of the Virginia Savage McAlester Tribute to create programs that preserve and enhance the quality for neighborhoods, places, and landmarks in Dallas.

The passing of Virginia Savage McAlester, one of Dallas’ most influential and important historical preservationists, in 2020 was a loss for the entire preservation community. Virginia was a noted author, champion of historic preservation and a wonderful friend of Preservation Dallas. Her legacy is immense and extends across the nation.

Several of Virginia’s friends and Preservation Dallas came together to create a special tribute in honor of Virginia Savage McAlester. This tribute has focused on raising funds to honor Virginia’s memory and as part of the tribute, the following has been done: 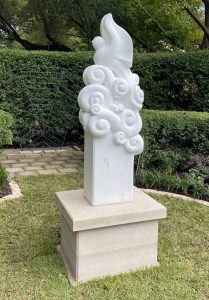 Virginia was beloved and respected by many. Below are thoughts from several people on Virginia and her incredible work over the years to save the historic places she loved and to educate the nation about the importance of historic architecture through her scholarly works.

Dallas Morning News architecture critic Mark Lamster wrote on her passing: “A petite woman with a blonde bob, she had an innate sense of propriety and a beatific smile that hinted at a heritage of Southern gentility. She appeared fragile, but her looks belied a tough constitution and intellect, qualities that together made her a successful advocate for the causes she championed.” He noted that McAlester was as much of a Dallas landmark as the neighborhoods she championed and said “When she came out and said something, the whole political establishment stopped because of who she was and the esteem the entire city had for her.” “There was tremendous backbone to her,” he added. “And a profound sense of decency and care for the environment as expressed in its buildings and its history.”

The distinguished Houston architectural historian Stephen Fox called her the ‘Queen of Dallas Preservation.’ He commented on her book A Field Guide to American Houses that “The book really had a significant influence nationally as a kind of handbook that enabled people locally to be able to identify typical American houses and talk about the characteristics of architectural styles.” He noted that most architecture books focused on elite buildings and the work of well-known architects – not homes in ordinary neighborhoods from small towns to bigger cities.

David Preziosi, Executive Director of Preservation Dallas, said, “Virginia has left us a tremendous legacy with all that she did here in Dallas to preserve our precious historic places. She also left preservationists around the county an incredible gift with an amazing book that gives us the words to describe the places we so valiantly fight for every day.”

McAlester was honored in May of 2019 with an honorary doctorate from SMU. Even with her health in decline McAlester couldn’t be kept from the ceremony. Daughter Amy Talkington said, “She was in ICU on a ventilator on Monday and on Saturday she was at SMU because she was determined to do that.”

“When she came out and said something, the whole political establishment stopped because of who she was and the esteem the entire city had for her.”

The National Trust for Historic Preservation noted, “From her seminal A Field Guide to American Houses, to her tireless work and leadership in Dallas and Fair Park, Virginia united Americans behind our movement with a common language and cause for the places that tell their story and make their neighborhoods feel more like home…remembering with gratitude the enduring legacy of history, community, and culture she leaves behind.”

Noting that Ms. McAlester’s death occurred while much of the world was sheltering in place, Peter Simek, the arts editor of D Magazine, wrote that one way to pay homage to her legacy was to practice what he called “wakeful wandering” and celebrate the architectural details that make each neighborhood unique. She recognized “that homes do more than shelter us,” Simek wrote. “They reflect and inform who we are.”

Penelope Green of The New York Times explained that Virginia’s book A Field Guide to American Houses, published in 1984 and revised in 2013, made her a household name among preservationists and architecture buffs.

Grafton Dulany Howland of Dallas and Director Emeritus Harvard College said, “I will miss Virginia. She had an inspirational perspective on our great city and all that is Harvard!”

“Virginia united Americans behind our movement with a common language and cause for the places that tell their story and make their neighborhoods feel more like home.”

Sharon Grigsby of The Dallas Morning News reported on McAlester’s receiving of the Key to the City saying, “Like so many of our true female heroes in Dallas, Texas and beyond, Ms. McAlester hasn’t made a lot of big headlines. She’s never been about grabbing the spotlight. Looking through DMN clips, I found that more often than not she shows up as part of thoughtful teams doing important work.” She went on to say “I’ve argued for years that one reason we haven’t yet had a female Texan of the Year is because women so often lead in ways that don’t create a big buzz or fit into a neat one-­year time frame. Female problem solvers and team builders go about their work quietly as they make a big difference year after year. Ms. McAlester is a prime example of someone with those attributes. What a well-deserved honor!”

Here are some reflections from past Preservation Dallas Executive Directors: I met Virginia in 2001 when I joined Preservation Dallas and began working on Discover Dallas, a survey of our city’s historic neighborhoods. I learned a great deal from her as we worked together for many years on many issues. Virginia’s approach to every preservation issue always started with informing herself. She gathered statistics, spoke with experts, found case studies, examined ordinances, studied the codes, met with decision-makers, and familiarized herself with the law. Virginia was deliberate in her course of action and was always laser focused. When it came to an issue, she would carry on that way for days, even weeks, sometimes months and occasionally years. She was also dynamic, as the best preservationists always are. History teaches us that the world is always in motion and always changing. She respected all sides in an issue and credited her father for teaching her that your obstacle today may be your solution next week. Virginia’s work continues today with all that we do in preservation. Locally, in Dallas and Texas, no others have made so great an impact on the historic built environment as Virginia Savage McAlester. Virginia always had a way of knowing what the next preservation crisis would be in Dallas. I’m not sure if she had a sixth sense or had an inside track on information. Nonetheless, she was quick to coalesce the troops and devise a strategy. You had to almost always go along and get on board. I can remember long voice messages on the answering machine, when we all used those. Her messages would run so long that they would take the entire tape and so she would call back another time or two and continue her message.

Dallas owes a great deal to Virginia and her vision set in an unwavering determination. The historic and architectural landscape would be quite different if she had not risen to the preservation cause early in her life. She gave a full lifetime to seeing her native community continue to tell its past for generations to come.

Be a part of the Virginia Savage McAlester Tribute to create programs that preserve and enhance the quality for neighborhoods, places, and landmarks in Dallas. 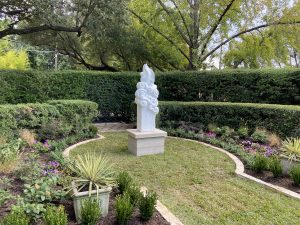 A special thank you to the following contributors

to the Tribute Fund to date

©2023 Preservation Dallas
This website has been funded in part by a grant from the Fondren Fund for Texas of the National Trust for Historic Preservation.